Flashes of red and green, whirling numbers and the click-clack of the bouncing ball: the sights and sounds of the roulette wheel make it one of the most iconic forms of gambling. While some casino games can be played anywhere using common dice or cards, roulette’s unique equipment means it is found almost exclusively on casino floors, or betting sites like Ontario’s digital casino, OLG.ca. This sets roulette apart as the game most often associated with casino glitz and glamour.

But how did the game come to be?

A Foundation of Fun

Here’s a quick clue to the game’s origins: the word “roulette” means “little wheel” in French. While there is debate on who exactly invented the game (many claim that 17th Century French scientist Blaise Pascal invented it in the quest for a perpetual motion machine) there is no doubt that it first took shape in Paris, created from a combination of popular European games

One of these games was hoca (or hocca) was a popular French game where players would bet on the flip of a card. In the Italian version, biribi, players placed bets on a numbered grid—foreshadowing how roulette players would eventually place theirs. This game was so popular among French aristocrats that some lost their entire fortunes, creating such social distress among the noble classes that Louis XIV imposed heavy fines and jail time on gamblers in 1691, but the game grew in popularity despite the royal decree.

Two other popular games, roly-poly and even-odd also paved the way for roulette. Both games were popular in early 1700s England, featuring spinning wheels with either numbered or coloured slots for players to bet on, and dedicated “bankers slots”—if the ball landed on one of these, all bets were lost to the bankers (or ‘house’) that ran the games.

These old European games were combined into the game we know today at the Paris’ Palais Royal in 1796. Taking the format of betting on numbers used in hoca and biribi, and the spinning wheel from roly-poly and even-odd, ‘roulette added numbered compartments from 1-36, a new black and red colour scheme, and the inclusion of 0 and 00 as “bank numbers” that would provide casinos with a financial advantage or ‘house edge’.

The first actual mention of roulette is found in the novel La Roulette, ou le Jour by 18th-century French author Jaques Lablee, where he describes those zeroes or “house pockets” that helped early casinos turn a profit. Francois and Louis Blanc—two French brothers living in Germany—modified the game for their own casino by removing the 00 compartment, giving gamblers a better chance of winning, and publicised it to attract players.

While many European nations began prohibiting casino gambling in the 19th century, the Blancs were granted permission to open a casino in Monte Carlo in the 1860s, where gambling had recently been legalized. Roulette became one of the most popular games in this new gambling haven, with people all over the world flocking to take a spin. Francois Blanc quickly became known as the “father” of roulette, with some folks even claiming that he bargained with the devil for its secrets! 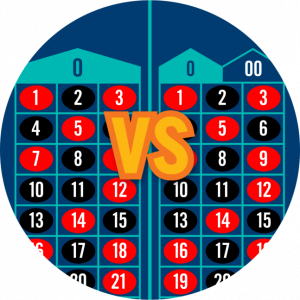 Today, roulette wheels are made in two distinct styles: European and American. The difference comes down to the zeroes, with Europe holding on primarily to the modified version from the Blanc brothers—the one with only one zero. It’s now known as “European” or “French” roulette (even though you might find it occasionally in a North American casino).

As roulette grew in popularity in the latter half of the 19th century, its original form—the one with a zero and a double zero—found popularity in the gambling halls of New Orleans, and the riverboats that travelled the Mississippi River. That’s why double zero roulette wheels are now referred to as “American”, despite their distinctly Parisian origins.

Fun fact: early American wheels often had one extra pocket featuring a bald eagle, a distinctly American symbol to set them apart from their Old-World relatives. This extra house pocket gave the casino even more of an advantage and as you can imagine, fell out of favour quickly. These days, antique wheels with eagle pockets can command quite the price on the collector’s market, reaching up to five figures at auction!

Spinning into the digital age

Like most things popular in America, roulette made its way to Canada, and officially in Ontario when our first casino—Casino Windsor—opened in 1993. Since then, roulette has evolved alongside the industry, with automated, electronic and video versions becoming increasingly popular as gambling moved into the digital age.

These new forms of the game are great for beginners, allowing them to learn the game at their own speed and without the pressure of other players. And for ultimate convenience, you can even play roulette online!

From it’s 17th-century origins to the present day, roulette has taken many forms. No matter what version you play—American, European, online, at the casino—there’s a lesson the game’s history can teach you: play for fun, unlike the French nobles who lost it all. That means set a budget, don’t try and win back losses, and know that nothing can beat the random nature of the game—it’s all up to the luck of the bouncing ball!

Want to try to hit some random roulette luck yourself? Learn how to play now!